“The challenges are whether the infrastructure keeps up – and by infrastructure we mean airports, runaways, terminals, slot capacity, and air navigation – we’ve got congested airspace and there are some challenges around the region – it’s a global problem,” Herdman told VOA.

The World Travel and Tourism Council (WTTC) says the industry employed 66.6 million people in the Asia Pacific region in 2016, adding $3.65 billion to the region’s economies. By 2026, the WTTC says jobs directly linked to tourism are set to reach 81.7 million.

WTTC President and CEO David Scowsill, recently called on Southeast Asian governments to ensure they have the infrastructure in place to cater to future demand from the region and China.

Tourist arrivals in Southeast Asia have leapfrogged in recent years to over 100 million, well ahead of the 74 million in 2010, with almost half from within the Association of South East Asian Nations (ASEAN).

FILE – Motorists pass by a stretch of a metro railway project being constructed in Hanoi, Vietnam.

In Vietnam, tourism growth led the government to announce a major expansion of its Tan Son Nhat International airport in Ho Chi Minh City to cope with passenger growth. The airport’s capacity, currently at 23 million passengers a year, is to be doubled under present plans with an additional runway, two terminals and extra aircraft aprons.

Initial extension work is due to begin this year to boost capacity to 38 million passengers by 2019. In 2016, Vietnam marked a 25 percent increase in international arrivals to 10 million, as well as serving 62 million domestic tourists, with total tourism revenue reaching $18 billion.

“Vietnam is growing very fast. Infrastructure is improving everywhere, and new hotels are coming up everywhere. New tourist destinations are opening up – domestic airports become international airports, – they make them bigger. So Vietnam is definitely heading Indochina in the development that is happening,” Kuenzle told VOA. 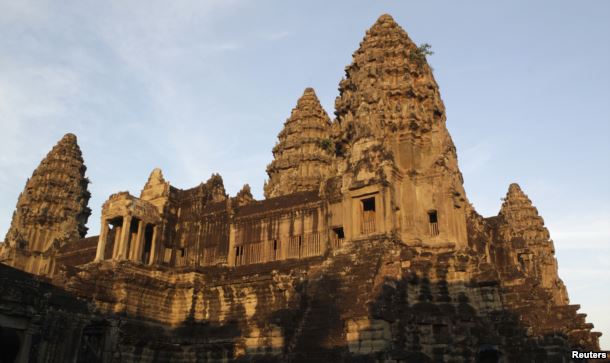 FILE – A view of Cambodia’s famous Angkor Wat temple is seen during sunrise in Siem Reap.

The fast growth has also been evident in Cambodia and Myanmar.

Cambodia recorded five million tourist arrivals in 2016, with 900,000 Chinese arrivals – a rise of 20 percent from the year earlier. Cambodia’s Tourism Minister Thong Khon, told the Khmer Times, the outlook is to reach 7.0 million arrivals by 2020.

In Myanmar, political progress in recent years has spurred visitor arrivals and more investment into hotel and tourism capacity.

Kuenzle says after “a tough year” in 2016 with hotel room rates rising and room shortages, times have changed.

“Going into this high season it has changed and there’s more capacity, more small hotels have opened up. So I don’t think we’re going to face a capacity problem like the last two seasons this year,” he said.

In Thailand, the WTTC has forecast travel and tourism industry’s contribution to national output (GDP), based on a growth of 4.0 percent, to around $83 billion, or 21 per cent of total GDP, and accounting for almost six million jobs.

A crackdown on low cost package tours in Thailand that lure Chinese travelers to pay for high priced souvenirs and other services, have led to a sharp decline in arrivals, especially over the upcoming Lunar New Year. Chinese visitors account for around eight million of Thailand’s overall visitor number of 30 million tourists.

But Phidel Vineles, a senior analyst at Singapore’s S. Rajaratnam School of International Studies at the Nanyang Technological University, in a recent commentary, said for ASEAN to see further growth in tourism the region needs to invest in sustainable tourism infrastructure and implement a policy of easier access to travel visas.

However, the overall upbeat outlook is set to be featured at this week’s ASEAN Tourism Forum (ATF) in Singapore, with a campaign to attract more than 120 million visitor arrivals to the region by the end of 2017, up from 109 million in 2015.